Heermeedjet and Meerouladen: two devious little Meercas. They've been all around Neopia up to no good, causing havoc everywhere! Now you get to play them as they dive into the Qasalan Royal Treasury to retrieve what Jazan had ordered his craftsmen to create in honor of Nabile: 100 golden statues. They should be given to her on her birthday, but the Meerca Brothers have other ideas...

Using either the mouse or the keyboard, you operate both Heermeedjet and Merouladen on ropes to pass the statues through various obstacles and to the bottom.

To use your mouse, move it to either Heermeedjet or Merouladen's half of the board. Move your mouse up or down to control what row they are on and use the left mouse button to move that row of crates across.

Note: The Meercas can only move a row in the direction they are facing. 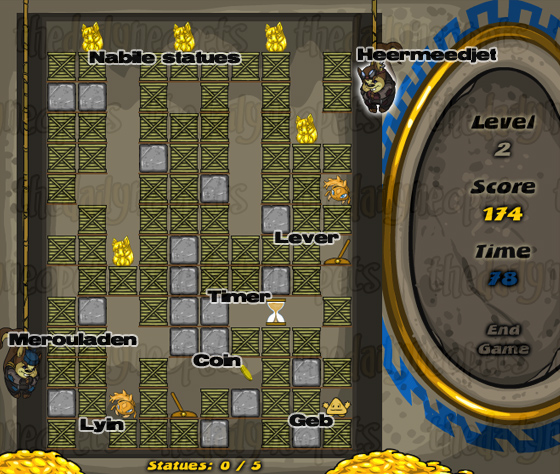 The goal of the game is to get the golden Nabile statues to the bottom of the screen. The statues will fall through any opening in the rows on the screen, and thus will move closer to the bottom row. Using the Meerca brothers to push a row moves the crates and makes room for the statues to fall.

The game board is mostly filled with crates and stones. The board also has several other items that you'll see: coins, gems, timers/sand clocks, levers, Gebs, and Lyins. You activate each of these items by dropping a statue onto them.

The best strategy for this game is to finish quickly. You will get a bonus point for every second that is left on the timer when you've completed a level. If you want a trophy or high score, you need to complete each level as quickly as possible to get as many bonus points as you can. Since there are only 9 levels, you need to gain as many points in each level as you can in order to get a high score.

To move your statues to the bottom row quickly, try to create long columns of space. Sometimes you can line the rows up just right so you can push the statues from the top row directly to the bottom row. This will save you a lot of time, which helps you earn a nice time bonus and increases your score. 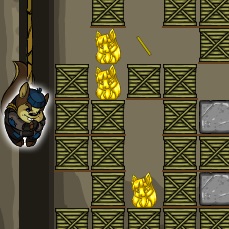 Move the top statue right first,
and then the bottom to create
a column Keep this in mind while you're moving statues. For example, let's say you have two statues in two rows on top of each other and, in the next row down, there is a space to drop them one square to the right. If you move the top statue one square right and then the bottom statue also one square right, both statues will fall through the space in the row, and you'll have a nice column of space to drop other statues. This will save you several moves later.

If you want to score enough for a trophy, you can follow these simple tips to help improve your score. 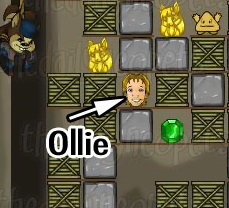 Ollie, the phantom orange shirt guy, sometimes makes an appearance in this game. When one of your Nabile statue is dropped on him, all the Lyins of the level are cleared out! It's very rare, though, so don't count on it!

With a little luck, some skill and the odd bit of know-how, you'll be a true robber in little time. Although you don't get to take the Nabile statues when you win, you could be taking a gold "The Great Qasalan Caper" trophy instead. Good luck!