Chia Bombers have invaded Geoffrey Chia's neighborhood and are attacking him and his friends with their nasty mud-slinging bazookas! Geoffrey has set out with his homemade water-balloon gun in an effort to drive them out of town!

You control Geoffrey's movement with the arrow keys and you shoot his water-balloon gun with the spacebar. Press the M key to drop a mine (up to 5 per levels). Your own mines can't hurt you but be careful not to walk on Chia bombers' mines!

The idea of the game is to kill all the Chias that appear in each level. Some Chias are easier to get rid of than others. Color will tell you how tough a bomber will be to take out:
Green - take only one hit and just wander around.
Blue - takes only two hits and has a slightly better sense of direction.
Yellow - takes three hits to kill and if not seen can easily kill you.
Red - takes four hits and will begin to follow you around.
Black - takes a whopping five hits to kill and will aggressively try to kill you!

There are no bonuses in this game, so there's a set amount of points you can earn per level. They are as follows:

There are two main strategies with this game: the "Better Safe Than Sorry" strategy and the "Gonna Make Those Bombers Sorry" method. Both have merit, so it's up to you to decide which best fits your play-style.

Typing "geoffrey" at any point in the game will give you an extra life.

While you are at the main screen in the beginning, if you hold down the right arrow and press 'Start', then you will start in the upper left corner and can immediately begin firing at the Chia bombers to the right. You can get the same result in between levels by ending the level in the top row and holding down the right and space keys. 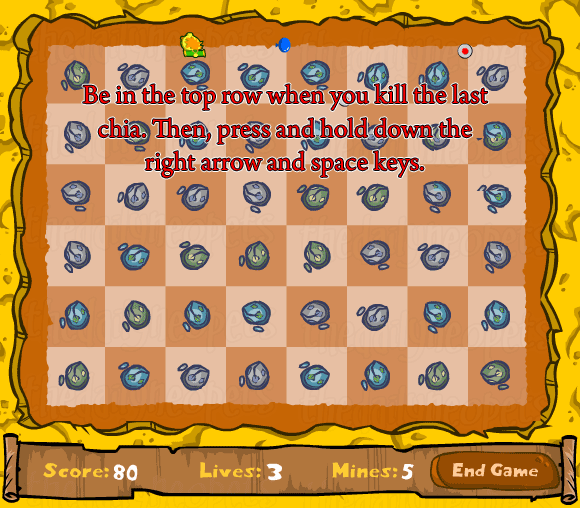 You need 1300 points for the avatar, so it may take lots of practice, but keep trying! Practice makes perfect. Good luck!