Instead of presenting the usual NC Challenge that has accompanied the Daily Dare, in past years, Lulu has put down her game controller to help save Roo Island from a massive bug infestation related to the activation of a new Games Room machine, created by King Roo. In the course of Lulu's quest, TNT released two NC events for the Daily Dare 2012 - The Case of the Missing King and Lulu's Bug Hunt. Players may choose to participate in either, both, or neither event. Participating in the NC events does not affect your trophy for the Daily Dare.

The Case of the Missing King

At the beginning of March, King Roo unveiled his latest creation - a brand-new Game Room machine. He released the prototype of his new Game Room machine to the Neopian public for testing, expecting that there were still some flaws in his design. Just before the Daily Dare was set to begin, King Roo discovered several problems with the machine, and he shut it down so that the necessary repairs could be made. King Roo then went off in search for the parts needed to fix his machine.

Having spent the better part of the last year honing his gaming skills, so that he could compete to maintain his title of the the Greatest Gamer in all of Neopia, Aristotle A. Avinroo snuck into the Games Room and restarted King Roo's flawed machine. He was not about to let the bugs in the machine get in the way of the Daily Dare. He had been counting down the sleeps until his favorite competition since the end of the Game Master Challenge.

AAA's little sister, Abigail, was smart enough to recognize that her brother's zeal for gaming was likely to have disastrous consequences. Already, the bugs in King Roo's machine were causing mild mayhem in the Game Room. She wanted to keep a close eye on her brother. Instead of hanging around to challenge Neopians at games the Avinroo siblings' cousin, Lulu, volunteered to go in search of the missing King Roo. Gathering up her adventuring book and some other supplies, Lulu set off on The Case of the Missing King NC Adventure!

The Case of the Missing King Adventure Book 5-Page Pack

The Case of the Missing King Adventure Book 13-Page Pack

Adventure Book Page Packs must be activated in your inventory before you can use them to vote. Once activated, players can choose to use one of their book pages to vote on Lulu's next step in completing her quest to find the missing king. Lulu will take the path chosen by the majority of the voters. Everyone who voted on a given day will receive the prize for that day. Prizes are awarded the day after votes are cast, so that all participants have the full day to vote. 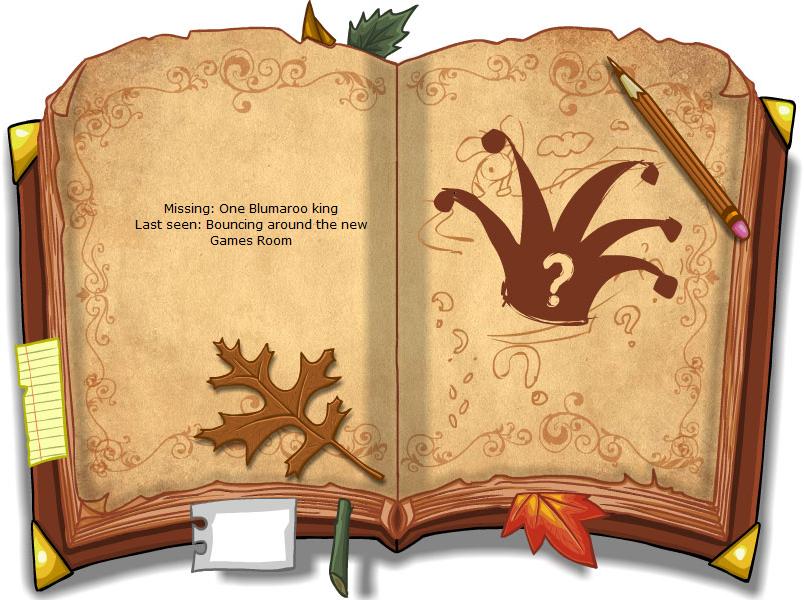 So AAA's running the Games Room in King Roo's absence, which sounds hilarious. But Abigail asked me to help her by finding King Roo, so I decided to use my journal to record the search, like a proper detective. Game scores aren't really my thing anyway, and how hard can it be to find one Blumaroo?

Now, King Roo left days ago; maybe Advisor Broo knows where he went. He's a grumpy old coot, but I bet he knows everything that goes on in the Rooish royal court. Then again, he kind of intimidates me... 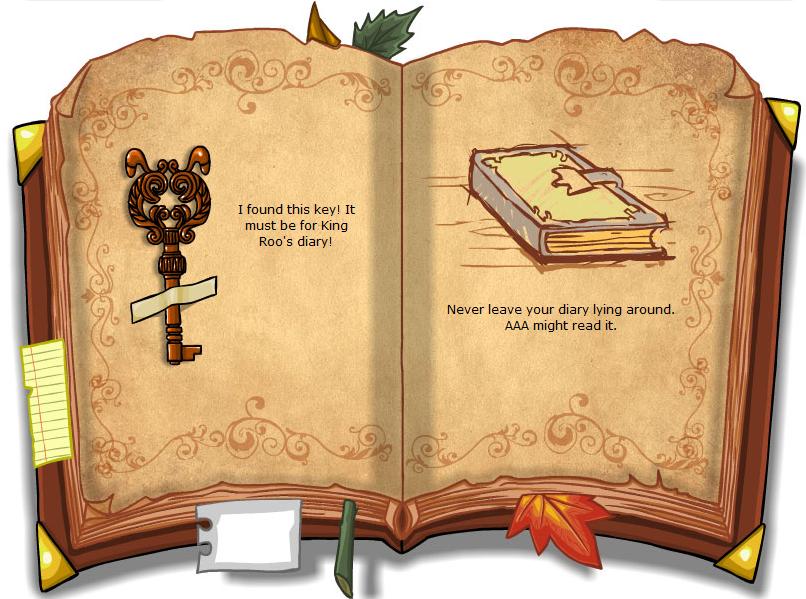 Ugh! There's another one! What's with these strange bugs I keep finding? If this is AAA's fault, I'm totally giving away his game controller when he's not looking.

Anyway, in his diary, King Roo said he wanted to visit a doctor in Neopia Central about the Games Room. Naturally, I concluded that he meant Dr. Clodbottle. So I went to his office, but it looks like the good doctor is away on business. Figures... 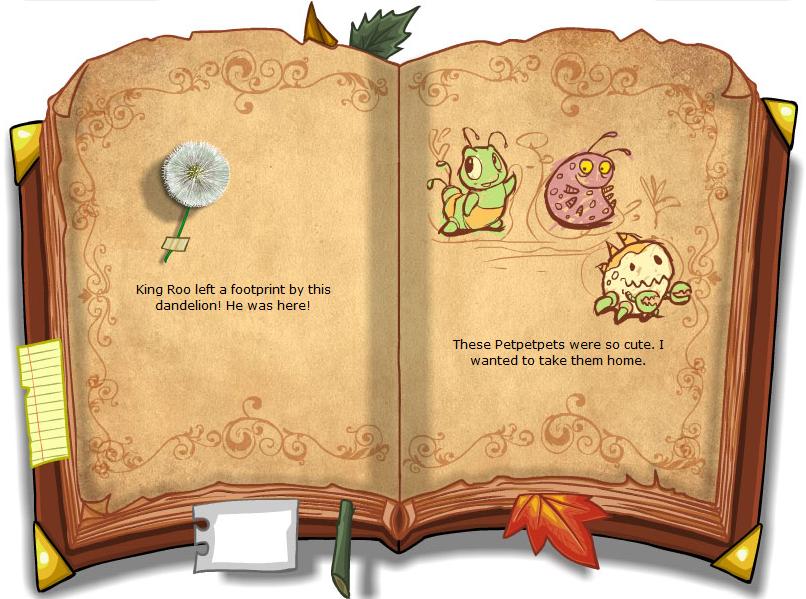 So Dr. Clodbottle was no help. And King Roo is long gone again. Argh! I guess the bugs aren't any known kind of Petpetpet, after all. Dr. Clodbottle didn't recognise them, and he's an expert. If King Roo can't solve the bug end of the problem, what's his next move? I'm thinking that maybe he'll try to fix the Games Room not to attract pests. I'd better track him down soon. 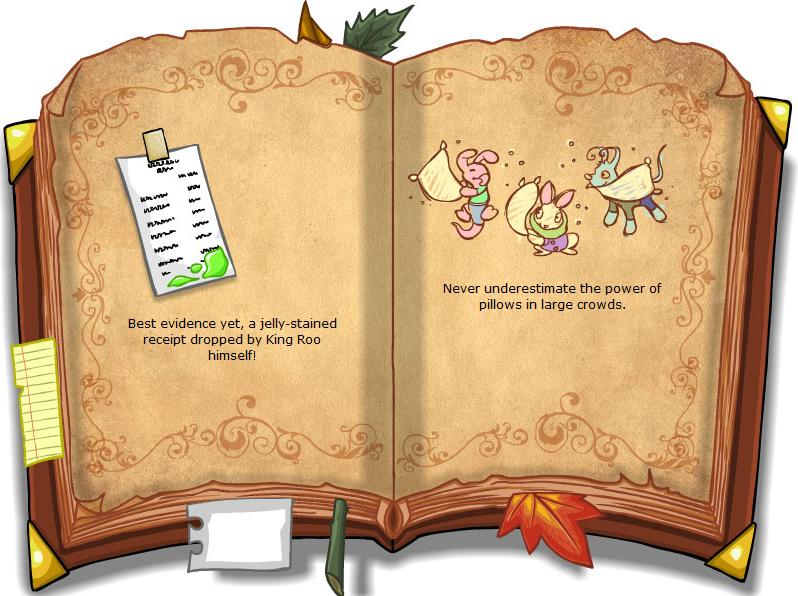 So King Roo has a repair manual now. I don't know that the new Games Room machine is really going to be listed in a repair manual anyone can buy at the Bookshop, though. Hmm. I'm going to ask where King Roo went next. But first, what's that noise outside?

Wow, it's a bunch of Neopets holding a pillow fight. Feathers are flying everywhere! Oh no, the're coming this way! 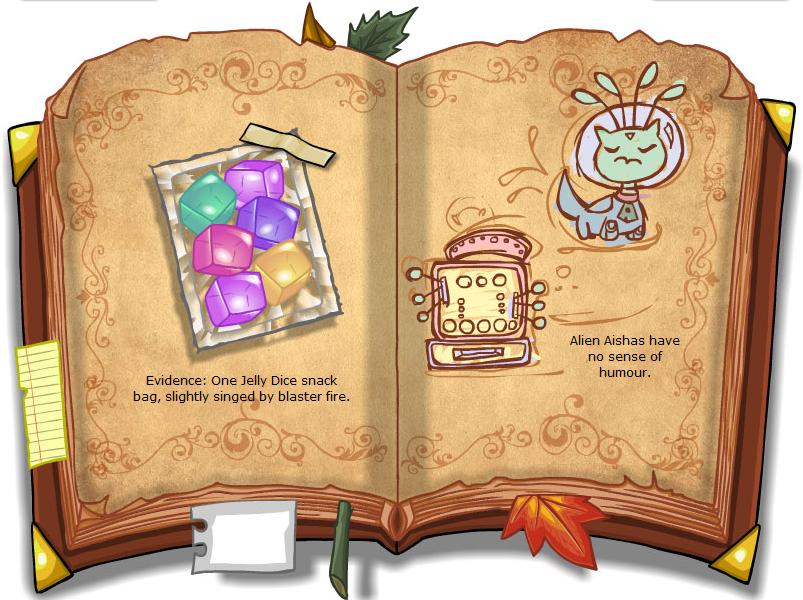 This is bad. I've been mulling the facts, and there's only one logical conclusion. King Roo must have been kidnapped by Alien Aishas! He could be in outer space even as I write this! I'm thinking this was not part of his plan. 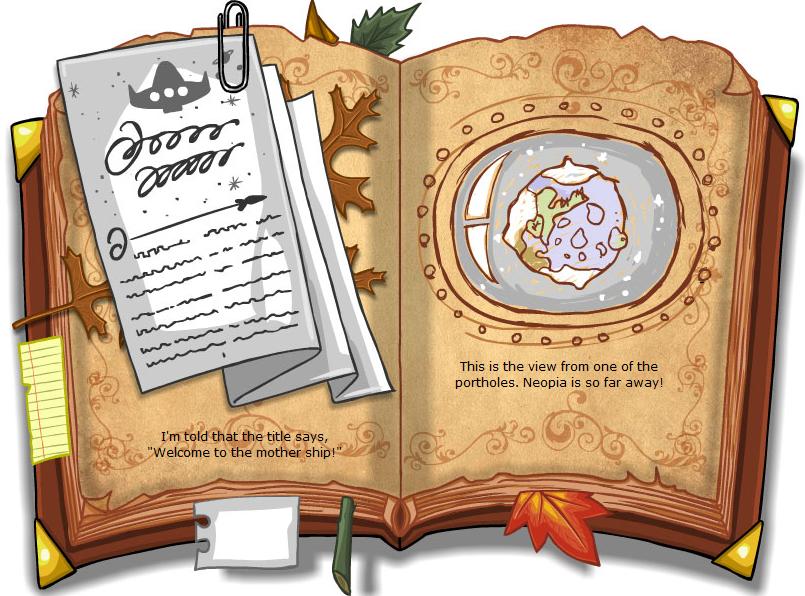 The Alien Aishas questioned King Roo and then released him at the Neolodge back in Neopia Central. I heard part of King Roo's interrogation: "Bugs! The horror! The Games Room was going to be my triumph, the tourist attraction that put Roo Island on the map, and now look at it -- it's ruined! It's... BUGGY!!" Poor King Roo.

On that note, I guess I'm off to the Neolodge. 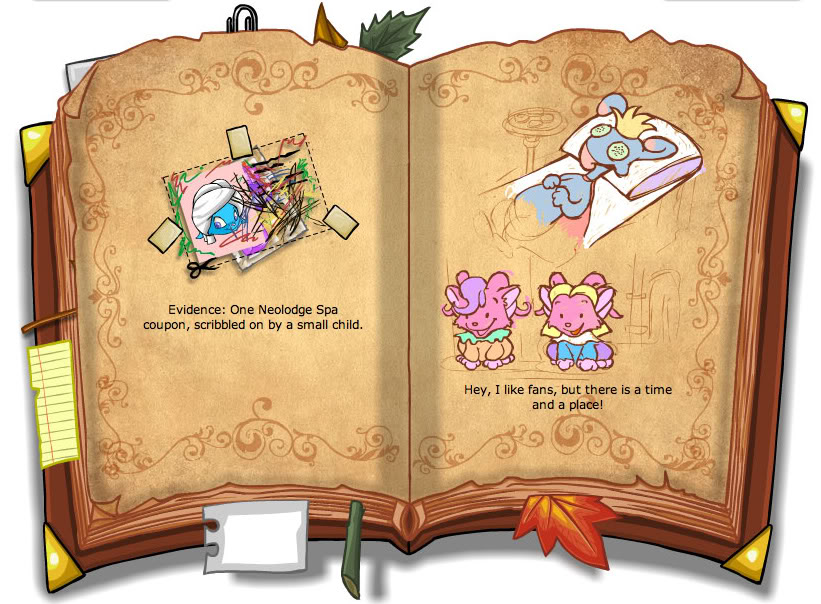 So I guess King Roo went to the spa to recover from his ordeal with the Alien Aishas. Good for him. But it sounds like now he's off to Terror Mountain, so I'm heading there myself. Hold on, someone wants to talk to me.

Okay, back. Unbelievable! These two Acara girls wanted an autograph and would NOT take no for an answer. I finally had to lock them in a broom closet and sneak off. Sloth's bowtie, can't people see I'm busy? 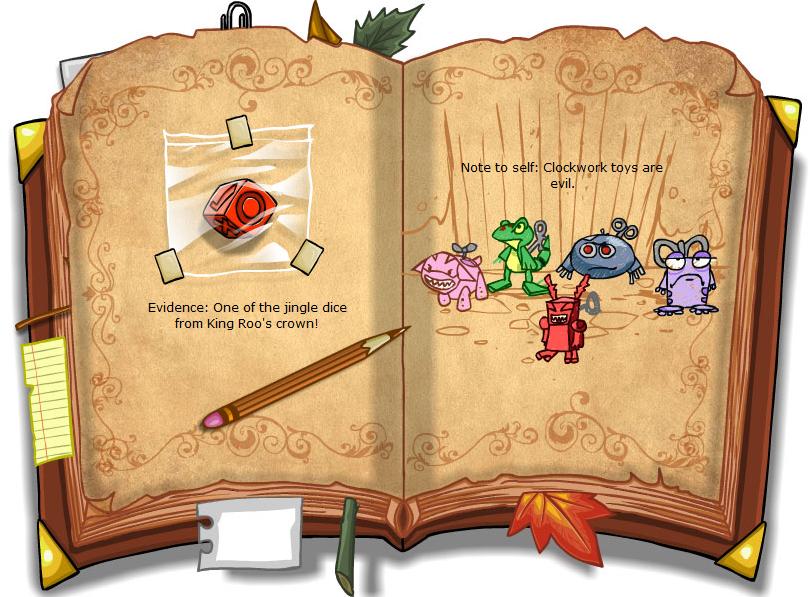 But then, when I knocked, this army of clockwork toys attacked me! I dashed inside, hoping Donny was around to disable his security. Instead, who do I find looting the place? None other than the notorious thief, Valin the Quick! It was Valin who'd unleashed the clockwork toys on me. When he saw me, he locked me up in this broom closet. That fink!

It's pretty hard to read what I'm writing here in the dark. How am I going to get out of this so I can find King Roo? Must think. 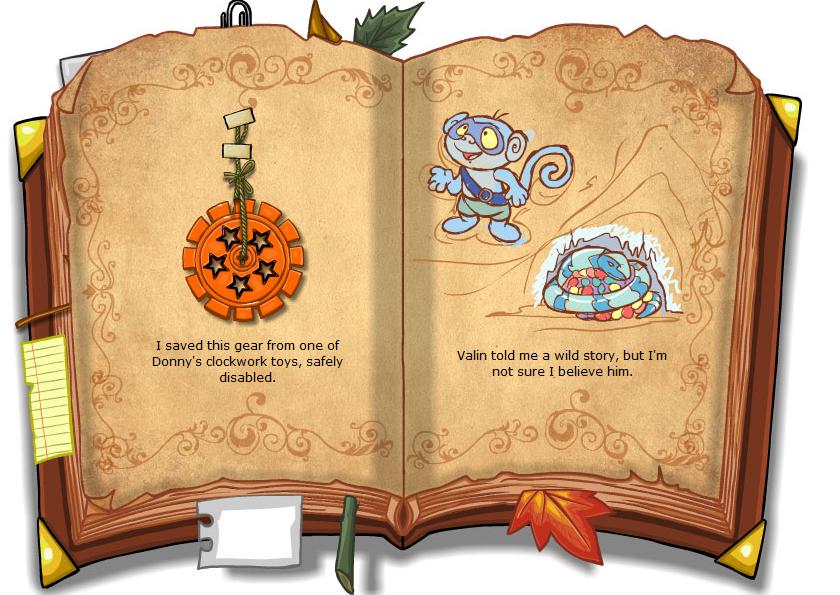 Apparently, Valin had come to the shop while Donny was on vacation. He was in the middle of his heist when King Roo walked in and surprised him. Valin pretended to be Donny's assistant and sent King Roo to fetch a toy from the Snowager. King Roo soon returned victorious from a game of "Don't Blink" with the Snowager, alive and well. (Why does this not surprise me?)

Anyway, Valin was so surprised by King Roo's success that he gave the king a map to find a reputable mechanic. Of course, Valin doesn't have one for ME... so it's back to chasing after King Roo. 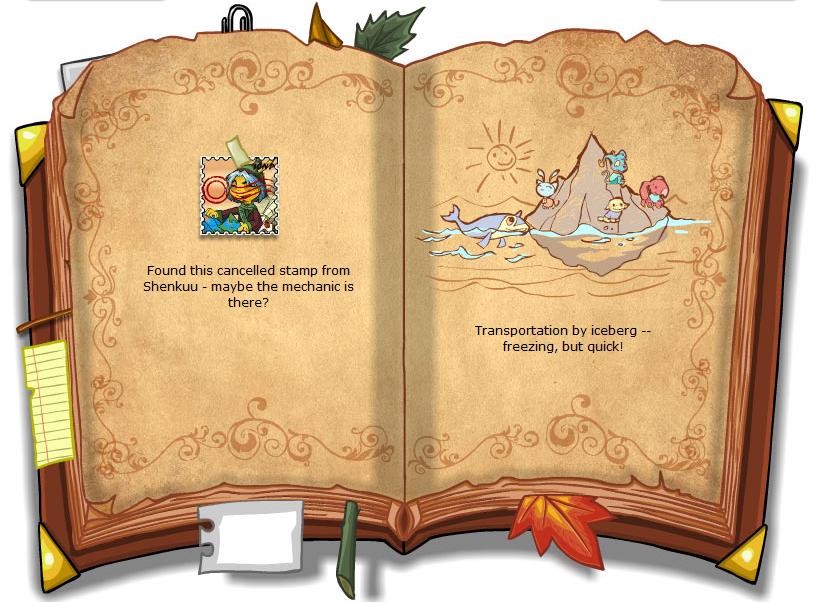 So it sounds like King Roo might visit a mechanic in Shenkuu. Either that, or King Roo forgot what he was doing and wandered off to play games. I hope not! I'd like the Games Room to be fixed, if only so Abigail and I don't have to listen to AAA complain about it. At any rate, since I don't have King Roo's map, I just have to keep following him and hope I can catch up.

At least Shenkuu is nice this time of year. 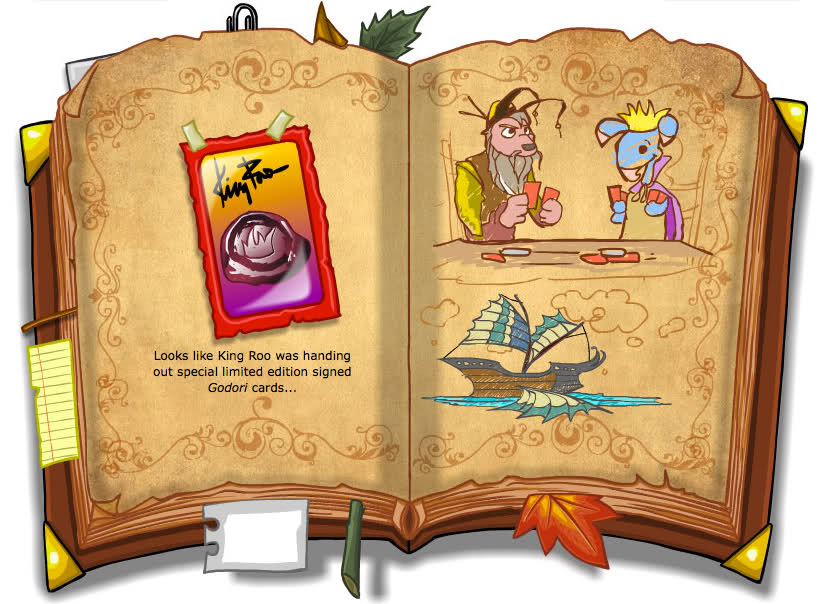 So it sounds like King Roo was in the Imperial Gardens with the emperor today. I guess when the emperor of Shenkuu invites you to a game, you don't turn him down. By the time I got there, though, King Roo had already sailed west on a courier ship. He must be following the map! 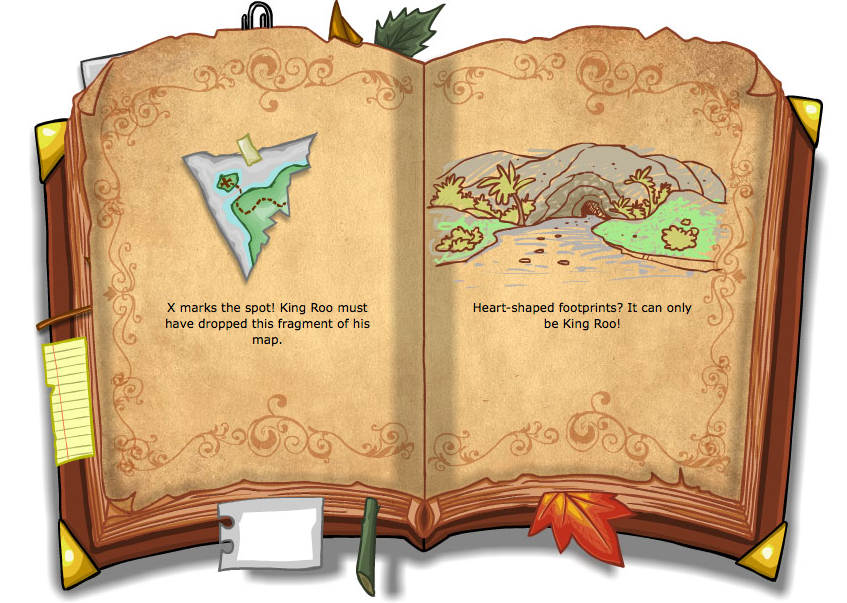 What kind of mechanic lives in the middle of nowhere? But I finally spotted King Roo's ship moored at a jungle island. I followed his footprints to a cave. I'm no tracker, but these tracks look pretty fresh, which means I missed him by only a few minutes. It looks like the tunnel leads to a long drop into darkness, so I'm finishing up this entry while I can still see to write, and then I'm going in. 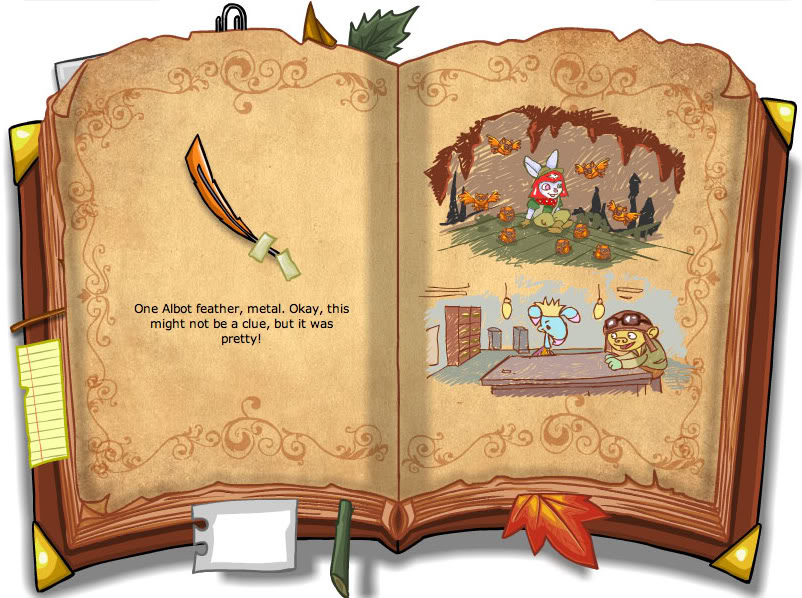 They were pretty surprised to see me. When I explained my purpose in following King Roo, though, he commended my dedication to the Games Room. It turns out that King Roo was on a secret mission to save the new Games Room from the bugs before Roo Island was ruined. Me too, King Roo.

All those bugs were attracted by the machine noise, so Tangor made a gadget (he calls it his 'sonic wave inverter', but it looks like a screwdriver to me) to cancel out the machine noise and drive away the bugs. With luck, it might even work... 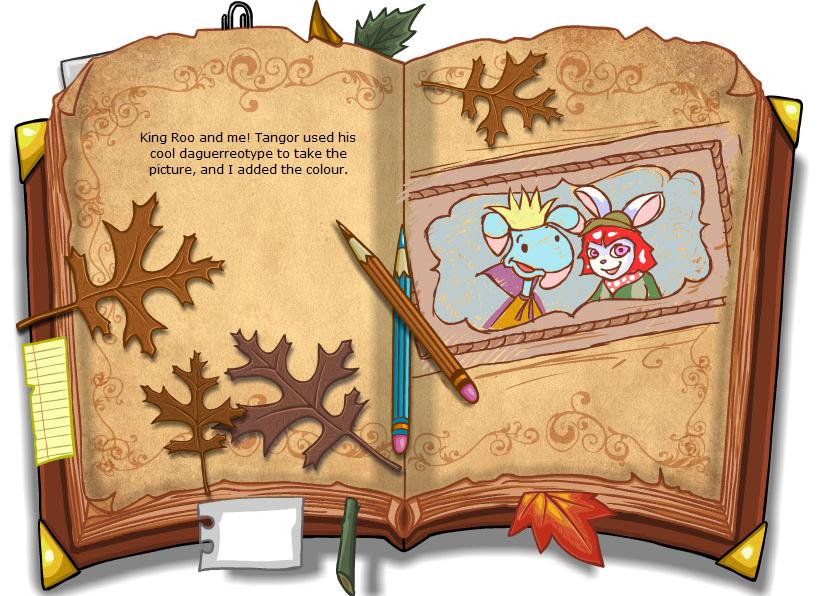 Thank goodness the gadget started working! There are fewer bugs already. However, Tangor warned us that the sonic wave inverter needed power from the Games Room itself, which means everyone needs to play lots of games, or the bugs will just come right back. Somehow, I don't think AAA will be too upset about having to play more games.

AND... King Roo said I could have this dress! He's been carrying it around since he left Roo Island; he ordered a fancy dice-themed cape, but the tailors got the order all wrong and made a dress, and well, King Roo wasn't going to wear a dress. He'd been planning to exchange it, but since I was helpful, he's giving to me instead!

The following bonus item was given out for activating an Adventure Book Page Pack. 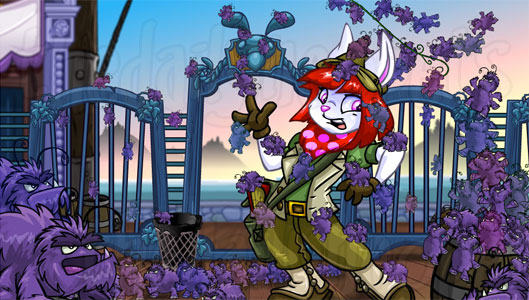 Now that King Roo has been found, Lulu is serious about getting rid of all these bugs taking over Roo Island. Join Lulu as she continues her NC Mall adventure to help eliminate the bug infestation unleashed upon Neopia, by AAA, after he restarted King Roo's prototype Games Room machine, to continue with the Daily Dare. Lulu will be catching bugs from March 22 through March 26, using special bug-catching nets.

Lulu's Bug Nets are available from the NC Mall in 5-packs only. One net pack costs 500 NC and is enough to complete the entire event. You cannot buy nets individually for this event. The nets must be activated in your inventory before you can claim the daily prizes for this event. Prizes do not need to be claimed each day, but they must all be claimed by March 26. There is no bonus prize for activating the Bug Nets or participating in the event.

Winning entry for "Mosaic Madness"!
Click here to enter the next round!